The article in The Ferret https://theferret.scot/ 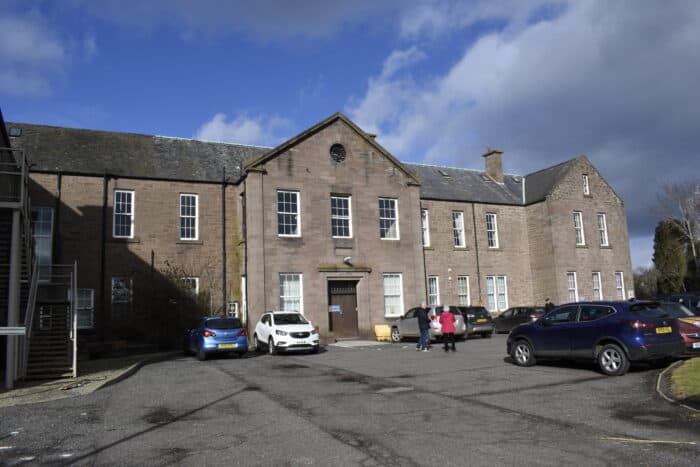 In the Angus town of Brechin, the old infirmary is starting to decay after years of closure. But despite years of pleading, local people with a vision to turn the site into a community health hub say they’ve been left “in limbo” by NHS Tayside.

It was late 2015 when Brechin’s residents discovered that services at both their local medical practice and infirmary were being cut due to reported GP shortages. Rather than accept the loss, local people set up Brechin Healthcare Group (BHG) to try and work with NHS Tayside and salvage their healthcare services.

But within a year, the infirmary was shut completely. The community has spent more than two years trying to convince the health board of its vision to turn the disused site into a community-run health and well-being hub.

BHG has raised more than £11,000 to survey the site and cover architect costs, submitted detailed proposals to the health board, and already facilitates health and mental health support at a small Brechin venue. But NHS Tayside is still to make a decision.

As the empty infirmary begins to deteriorate, BHG say the future of health services in the town has been left in limbo. NHS Tayside said it “remains committed” to considering BHG’s application.

But Angus MSP and Scottish Government public health minister Mairi Gougeon said she is “frustrated and disappointed” at NHS Tayside’s handling of BHG’s Community Asset Transfer (CAT) request, which would see the keys to the infirmary handed over. BHG has been “fulfilling every ask” and the health board “must take a decision”, she stressed.

BHG’s plans would see the main infirmary building house a wide range of organisations offering health, mental health and wellbeing support, while a local business would take over the annexe building and add on a cafe and gym. The site’s extensive garden area would become a greenspace to aid mental health.

The group pitched their plan to NHS Tayside and in March 2019 requested a CAT. Under the Community Empowerment (Scotland) Act 2015, NHS Tayside must examine the proposal and, until a decision is made, not sell to anyone else.

But Covid-19 disruption meant the health board did not reach a decision within the standard six months, and deferred the decision to January 2021.

Faced with a long wait, BHG established the temporary Jenner Centre in central Brechin in July 2020. The site gives a range of organisations, including homelessness and addiction support services, a place to meet their clients. But as the small centre cannot accommodate all the groups that need it, BHG stressed it is only a short-term solution.

Discussion of the proposal was delayed again until late February, but a week before the decision date, BHG was told it would not be heard then either. The group are still waiting for a date but have been told a decision might not be on the agenda until June.

“We felt we were getting somewhere”, said Grahame Lockhart, BHG’s chair.

“But the knock-back on the 18th of February seems to indicate that NHS Tayside has its own agenda which does not include a community group like ours. We are in limbo at this time not knowing what’s going to happen.

“This is a huge opportunity to develop a range of services on the one site and we cannot understand why NHS Tayside is not keen to be involved. NHS Tayside does not appear to have any plans to use the Brechin Infirmary site for healthcare purposes – the reason for which the land and buildings were originally donated. We wonder, what is its agenda actually?“

When he first visited the infirmary in 2019, Lockhart said the site was in a reasonable condition, with just a bit of maintenance needed. But on a recent visit, water had leaked through ceilings in several rooms, leaving paint and plaster-filled pools of rain water beneath.

“One of our big concerns is that the longer it lies empty the more the condition will deteriorate,” said Lockhart. “There is also a concern that the empty buildings could attract vandalism.”

He added: “We are trying to explain to NHS Tayside that the health and wellbeing benefits to the folk in the community by selling us the site and setting up the hub far outweigh the financial benefit if it was to sell it and get a few hundred thousand pounds from it.”

‘NHS Tayside must take a decision’

Mairi Gougeon MSP is a Brechin resident and one of the group’s supporters. She told The Ferret: “Despite fulfilling every ask that’s been required of them, still no decision has been made which is seriously impeding their ability to apply for funding and progress the amazing work they’ve been doing in Brechin.

“I know that the health board has been dealing with unprecedented challenges over the course of the past year. However, BHG have been told at various points that their CAT application would be discussed at board meetings, only for it to be removed from the agenda at the last minute.”

BHG “have partners who are willing and ready to work with them if they can get access to the infirmary site”, added Gougeon. “NHS Tayside must take a decision on this and allow the BHG to finally move forward.”

“It is important where the disposal of key public assets is being considered that communities are given the option to take these assets into community ownership – either under the legislative framework created by the Community Empowerment Act or negotiated outwith the Act.

“COSS will continue to support the Brechin Healthcare Group to ensure that their case for asset transfer is considered appropriately.”

An NHS Tayside spokesperson said: “In January 2021, in line with other Health Boards, in response to the pandemic Tayside NHS Board agreed to the deferment of the board’s standing committees.

“The Community Asset Transfer process dictates robust and comprehensive governance arrangements at executive officer level and at standing committee and board levels. There are multiple steps in this process to assure all parties that full consideration is given to any application. The NHS in Scotland remains on an emergency footing and, as such, the adapted governance arrangements remain in place at this time.

“The executive team remains committed to the consideration of the application by Brechin Healthcare Group and its recommendation to the Board in respect of the Community Asset Transfer in order that Tayside NHS Board may consider a final report towards the end of the first quarter of the financial year 2021/22.”

All images thanks to Brechin Healthcare Group